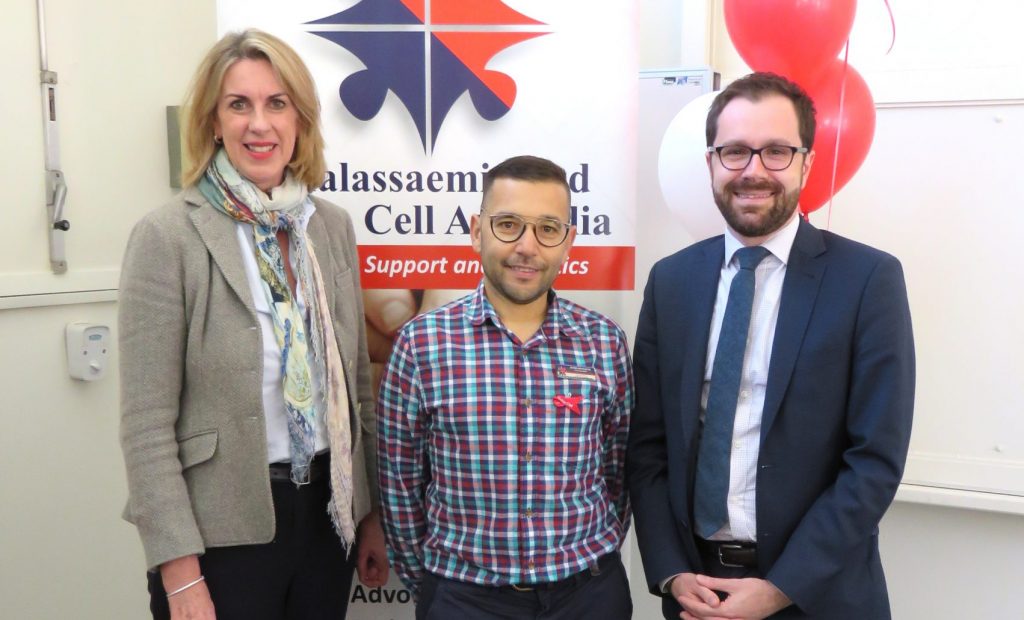 As chair of the not-for-profit Thalassaemia and Sickle Cell Australia (TASCA), Peter Verveniotis knows a thing or two about the chronic genetic disorders that his organisation is dedicated to offering support, raising awareness and encouraging the public to donate blood to help those affected to manage their conditions.

Mr Verveniotis has Thalassaemia Major (also known as Mediterranean Anaemia) and attends Monash Medical Centre every three weeks to receive three bags of blood. Like anaemia, it is a genetic condition for which there is no cure but it is possible to live a relatively normal life through consistent treatments.

“Each time I attend, I receive three bags of blood and am reviewed by a medical practitioner (haematology resident). Every three months I am reviewed by the Haematology consultant. I also see specialised consultants annually such as endocrine and cardiac services,” Mr Verveniotis said.

” Living with Thalassaemia is not a simple undertaking, as many who live with the condition struggle with the treatment. … I have had to learn the hard way to accept my condition and work hard to keep myself healthy.”

Mr Verveniotis is an early parenting practitioner with the Maternal and Child Health (MCH) Services and is an early learning centre administrator. He is also studying for a Bachelor degree in Early Childhood Education. Along with his role as chair of TASCA, he is also an consumer advisor for the Monash Health Blood Committee.

“As a child my instinct was to rebel, I didn’t enjoy chelating (iron removal treatment) and attending my many medical appointments such as echocardiograms, Magnetic Resonance Imaging (MRI) scans of the heart, bone-density tests, ultrasounds of the spleen and liver, dental and specialised bone clinics.

He said one of the reasons he joined TASCA as a general committee member five years ago was to support and advocate for patients with genetic blood disorders, raise public awareness and improve the conditions of treatment in Melbourne hospitals.

He draws on his own experience to drive the message on.

“This is a personal story I tell in my mentoring of the younger patients and the community. I have lived it, so I understand it,” Mr Verveniotis said.

He recounts the embarrassment he felt every time he was called on the school public address system to go to the school office where the district nurse awaited him to take samples of his blood to match with available donor blood. The nurse would even visit him at home in the evening help prepare and administer his injections.

“Unlike those days, we now attend a pathology centre to perform this vital procedure. For some, this is very inconvenient, especially when the blood samples are misplaced, lost or completed incorrectly.”

One of the side effects of repeated blood transfusion is an overload of iron in the blood that is overcome with chelation therapy. For some the medication required can be taken orally but that does not work for everyone.

“For me, this involves infusing Desferrioxamine (an iron chelator drug) subcutaneously through a small butterfly needle for 10 hours overnight using an infuser, five times a week.”

His older brother, who also inherited thalassaemia, died of a cardiac arrest when he was just 25.

“My parents didn’t know that they were carriers when they got married. If they had been married in Greece or Cyprus, a blood test would have been mandatory, and the risks would have been known. As such, when my brother was diagnosed it was a shock to them. He was five years older than me, however, he didn’t start chelating until he was in his early teens. The iron overload from the blood transfusions from birth to the age of 10 caused irreparable damage to his organs.”

His brother was a guide and mentor to his younger sibling. They shared the same blood type but not the same fate.

“It was just the luck of the draw that he contracted Hepatitis C and I didn’t. This was common amongst our community and many thalassaemia patients are still living with the blood-borne viruses contracted through contaminated blood supply in the 1980s. The stigma of having a blood-borne virus further adds to both physical and emotional issues associated with having a genetic blood disorder.”

Another twist of fate was that their sister did not inherit thalassaemia and was able to start her own family and neither of her two children have inherited the disorder.

His brother’s death was a massive blow to himself and to his family. The family rallied when Mr Vervaniotis health began to fail.

“I let my health suffer and I was not strictly following my treatment regimen. As a consequence, the iron built up in my organs, in particular, my heart. Before long, I was admitted to the hospital’s coronary care unit as I was near congestive heart failure with a severely dilated heart.”

He was visited by Professor Don Bowden who was the head of Thalassaemia Services Victoria and the time and he was brutally honest with the young man.

“He told my father who was caring for me at the time that my chances of survival were no better than 50/50. My only option was to chelate. I chelated 24/7 for many months on end to try to reverse the damage that had been done.

“I am lucky. My health improved. To this day, medical staff from the Medical Infusion Unit at Monash where I have my treatment use me as an example to medical students, junior staff and even other patients of the importance of compliance with treatment.”

Becoming a member of TASCA was a way of driving that message on.

“Our membership is growing. One of the oldest members is a patient who is 70 years of age which I truly admire. The youngest member is six. To think that there are children still passing away from this condition and who struggle to receive basic treatment is heartbreaking.

“For this reason, TASCA’s work in promoting genetic testing, educating the broader community and advocating for the needs of patients, their families and carers is of such importance and value,” said Mr Verveniotis.

“TASCA is grateful for the ongoing support of the community around Victoria and Australia.

The latest TASCA newsletter is out now.

Want a hard copy? Let us know by sending a request through email. 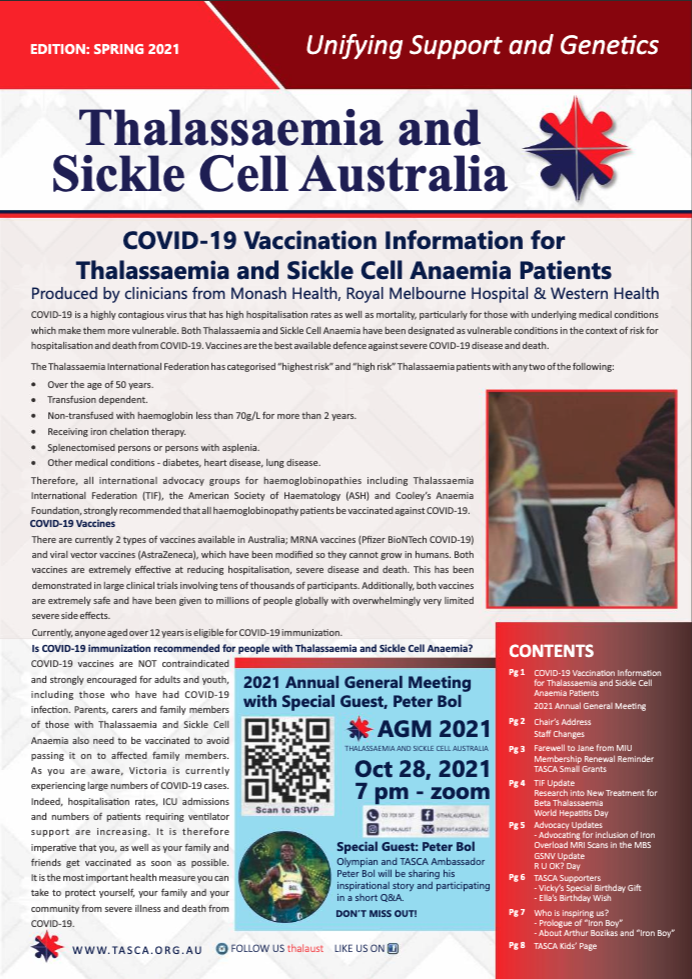 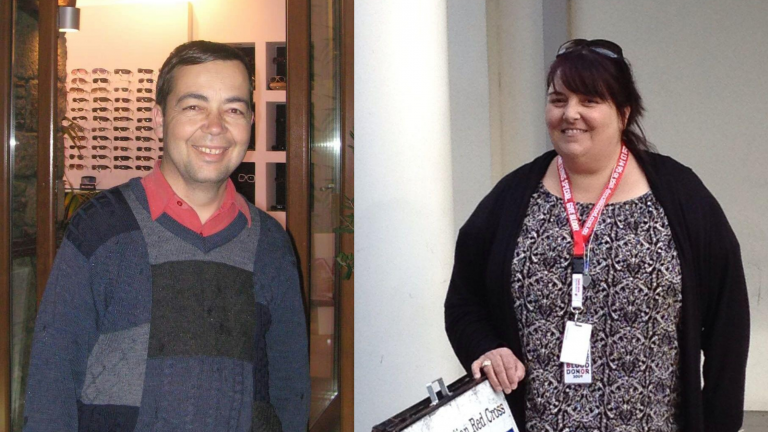 The TASCA Small Grant in Honour Sotirios Katakouzinos & Maria Kastoras is now available and open for applications from TASCA members.

of The TASCA Small Grants program is intended to improve the quality of life and wellbeing of patients through a small grant to fund equipment or other non-perishables for treatment centres.

Who is eligible to apply?

What may be funded?

What will not be funded?

What is the maximum value of the grant?

TASCA will fund equipment to the value of $750.